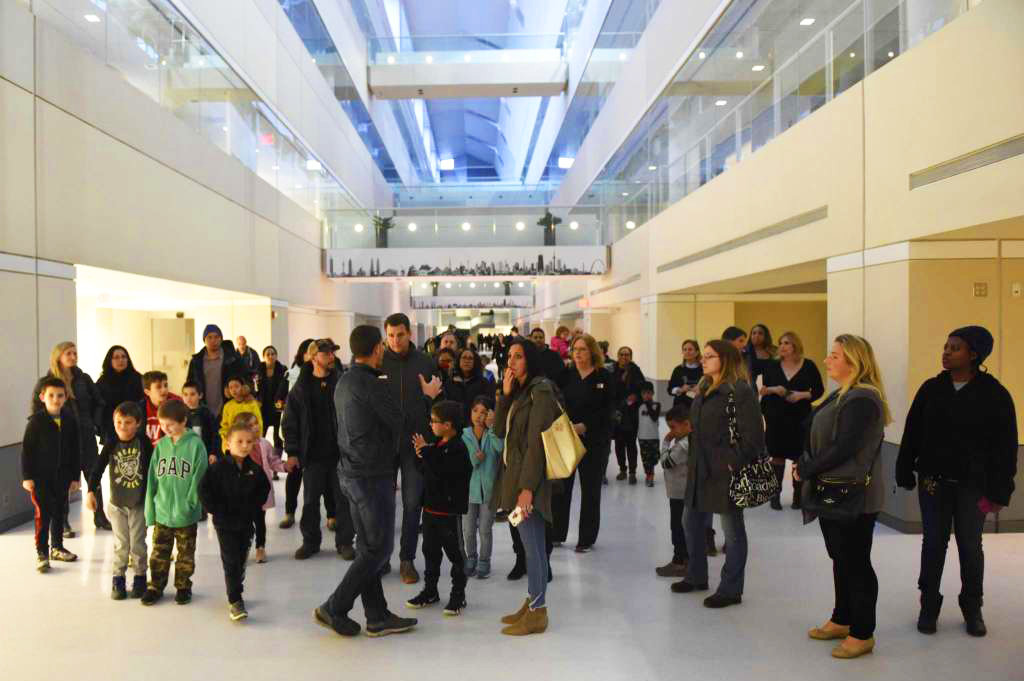 In the six days since Westover Magnet Elementary School students were told where they would be moving while their building is cleared of mold , office spaces at Silicon Harbor have been transformed into glass-paned classrooms. Conference rooms became computer labs. Huddle spaces now store learning materials. A once-carpeted hallway is now a gym.

Wearing pink work boots and a hot pink hard hat, Principal Kathy Wunder greeted students and parents for an open house and tour of their new 108,800-square-foot facility, on the third and fourth floors of the Elmcroft Road office building, on Tuesday.

The meeting took place in one of the makeshift school’s open spaces, a prominent feature of the new arrangement, for which Wunder said they’ll be purchasing “cluster area” furniture.

“The difference you might notice is it’s a different concept,” she said. “It’s not all classrooms with closed doors that are self-contained. It’s an open space concept. I’m excited about that. I think it’s going to be some real 21st century learning.”

Students spent the school day at Chelsea Piers for an educational field trip. Tuesday was originally supposed to be the first day at the new space, but the district moved it back to Wednesday to allow teachers more time in their classrooms.

“We are still Westover,” Wunder said. “What defines us is who we are, our program and what we do.”

RELATED: What we know about the mold problem in Stamford schools

Familiar equipment and furniture from the old building will be popping up as it’s cleaned, Wunder said. Items that can’t be cleaned will be replaced, as with the 300 donated books and shelves for the relocated media center. A Gofundme has also been started for more classroom supplies.

“It’s like we had a fire,” Wunder said. “In a fire, you lose everything. We thought that was the case. The good news is, we’re getting things back. … It won’t happen overnight. We’re in a really good place, but it’s a work in progress.”

The majority of the school is based on the fourth floor, with glass-paned classrooms for kindergarten through fifth grade lining the space and wrapping around the cafeteria, media center and main office. A gymnasium area, two dance classrooms, two music rooms, a small auditorium and an instrumental music space are on the third floor of the building, as well as administration offices, some of the Arts and Problem Solving team and another main office.

Signs going up Wednesday will guide students and parents around the space, and staff will be posted to avoid confusion.

According to a district official, the main lobby of the building is mostly used for deliveries, since the 100 Building and Land Trust employees who share the space enter through entrances on their respective garage levels.

In addition, the district is hiring a school resource officer and has a security guard on hand who is a 20-year veteran of the Stamford Police Department. There is also an elevator monitor (though students won’t be using the elevators), a PA system in the works, phones and 35 walkie-talkies on loan from the Stamford Fire Department. Students will be practicing a fire drill Wednesday and there are lockdown and evacuation procedures in place.

“I feel we’re in a safe building,” Wunder said.

The staff is still exploring options for recess spaces, which could potentially be a nearby park or the fourth story of the garage.

After listening to Wunder explain the lay of the land, apprehensive parents and students split up by grade level and took tours of the new space, including their relocated classrooms. Some teachers took advantage of the glass classroom walls to write welcoming messages for the students.

As parents toured the space — which they’ll be able to visit over two weeks thanks to a temporary open-door policy — they began to warm up. One even joked his daughter now has a “corner office” after seeing her new classroom.

“It’s beautiful,” said Lisa Grabisch, who has a first-grader in the school. “What they’ve done with this space in a short amount of time is incredible.”

In particular, Grabisch said she liked the idea of flexible-space learning and extra building security.

“Everyone came together to make this happen,” she said.

Within the next month, Phase II of the renovation is expected to be completed, which includes building an entrance for buses into the back of the building and adding more classroom space to the third floor.