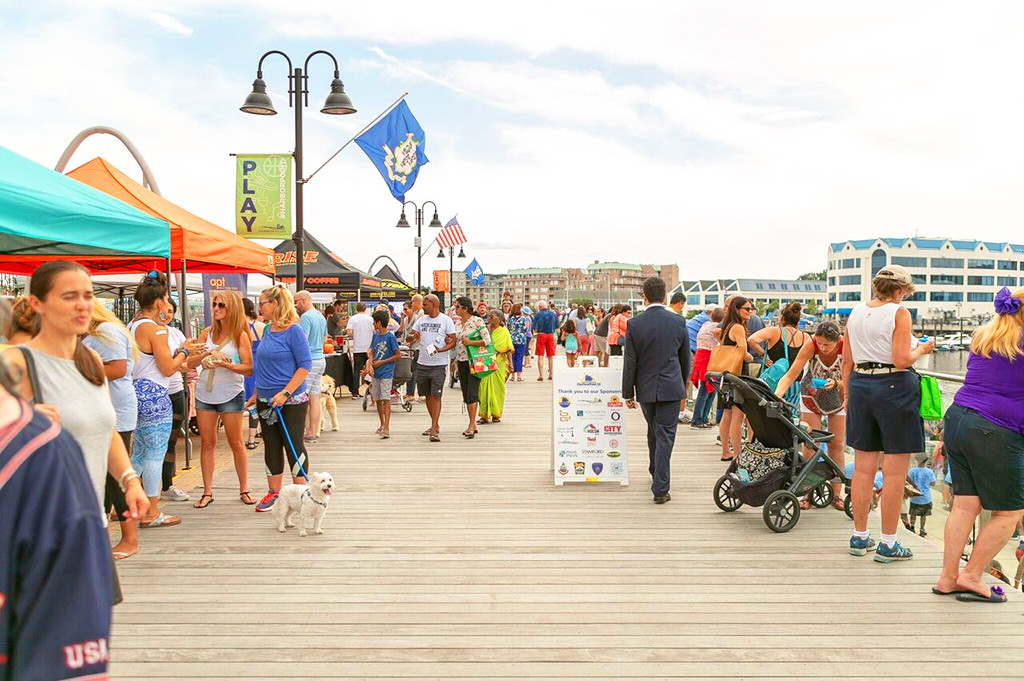 Teaming Up for Growth at Stamford’s Harbor Point

BLT took 80 acres of industrial sites in the city’s South End and built a thriving waterfront community that is often cited as a successful public-private partnership of large proportions.

“The change has been great. When we started, the area was almost desolate. There was really no activity during the day and no activity at all at night. Now there are people everywhere,” said Ted Ferrarone, BLT’s chief operating officer.

It’s also significantly increased the tax revenues generated by the properties from $1 million to about $21 million, generated “millions of dollars” in permit and other development fees paid over the years and income taxes paid by new residents.

The transit-oriented development is located south of the Stamford train station, Interstate 95 and the city’s central business district. Now encompassing more than 100 acres, Harbor Point is still being built out, with more apartments and offices in the pipeline. The project was awarded LEED-ND Gold certification and is often pointed to as an example of a successful public-private partnership. The Connecticut Department of Energy and Environmental Protection cites it as a case study for brownfield remediation. The Brownfield Coalition of the Northeast gave the project its 2018 Sustainable Communities Redevelopment Award.
Lining up funds

Over the years, the developers have used an eclectic mix of state and federal grants, loans and tax credits. While there has been no direct city funding, the city and state both had to approve legislation establishing the Tax Increment Financing (TIF) district that allowed $145 million in bonds to be sold in 2010 for massive infrastructure work. Connecticut’s DEEP and Department of Economic Development were involved through state investments, mostly loans, totaling more than $8 million.

“To do a project this big requires utilizing every form of capital you can think of,” Ferrarone said, ticking off a list of financing methods over the years. “Real equity; we issued the TIF bonds; we used a variety of debt—traditional construction loans, bridge loans and end loans from a wide variety of different lenders. We had state and federal historical tax credits…”

He added that BLT is also considering whether it will be eligible for Opportunity Zone tax benefits, an option for developers building in economically disadvantaged areas, passed by Congress as part of the Tax Cuts and Jobs Act.

“We are researching it now like everybody else. A project of this size requires a lot of collaboration at every level,” he concluded.
Kicking things off

The 80 acres that formed the original Harbor Point development were two former manufacturing sites and a closed Northeast Utilities power plant. BLT took over the project from the original developer, Antares Investment Partners, in 2008. All the approvals remained in place and BLT started building. Thomas Madden, Stamford’s economic development director, said Antares, and later BLT, worked off the city’s 2002 master plan, which encouraged transit-oriented development around the train station for both South End and downtown.

“One of the first things we did was the infrastructure,” Ferrarone said. “The infrastructure had been really neglected and that was the impetus to put the TIF in. … It has been a huge win for the neighborhood.”

“Once the bonds are paid off, all the infrastructure reverts to the city,” Madden noted.

Additionally, free shuttles and trolleys connect Harbor Point neighborhoods to the waterfront, train station and downtown. A water taxi operates in the summer and a bike sharing program is being piloted.

Madden also said that the infrastructure work, along with the brownfield remediation, were particularly important to the city because it opened the waterfront to the public and set the stage for development and new businesses. Among the early arrivals was Dinosaur Bar-B-Que, which began a 20-year lease in 2012 on the ground floor of 845 Canal St., one of the restored Yale & Towne factory buildings. Also moving in early was Design Within Reach, which relocated its headquarters in 2011 from San Francisco with the help of $1.5 million in tax credits. There are now at least 30 restaurants and retailers in South End, including the 80,000-square-foot Fairway Market, which opened in 2010.

The developer is also working to bring online a 500,000-square-foot office building known as Gateway Harbor Point, Charter Communications’ new headquarters. The 6.5-acre site connects to the Metro-North and Amtrak train station and has space for a second 500,000-square-foot building should Charter need it, Ferrarone mentioned.
Increasing affordable housing stock

Madden noted that BLT, which has already constructed nearly 3,000 apartments in South End and is on track to build about 4,200, is one of the city’s largest affordable housing developers. The city mandates 10 percent of newly built multifamily units to be set aside for lower-income residents. Of the properties developed–including high-end waterfront high-rises, mid-rises, townhouses and historic loft buildings–about 298 units are below market rate. Ferrarone said that this accounts for a huge percentage of the total BMRs built in Stamford over the past decade.

The developer has already sold off several of the new apartment buildings, including 101 Park Place, 121 Towne and Infinity. In December 2016, BLT and Lubert-Adler Real Estate Funds also sold a five-property, 1,214-unit Class A portfolio for roughly $395 million to Gaia Real Estate and four institutional partners.

On the development front, BLT has more recently added 392 units at NV@Harbor Point and 218 apartments at Harbor Landing. Another 435 units are underway, an additional 435 approved and about 670 apartments proposed for the former B&S Carting site.

Madden stressed that each building requires separate city approvals. While some residents may question all the development done over the past decade, he said that the city and BLT have worked well together.