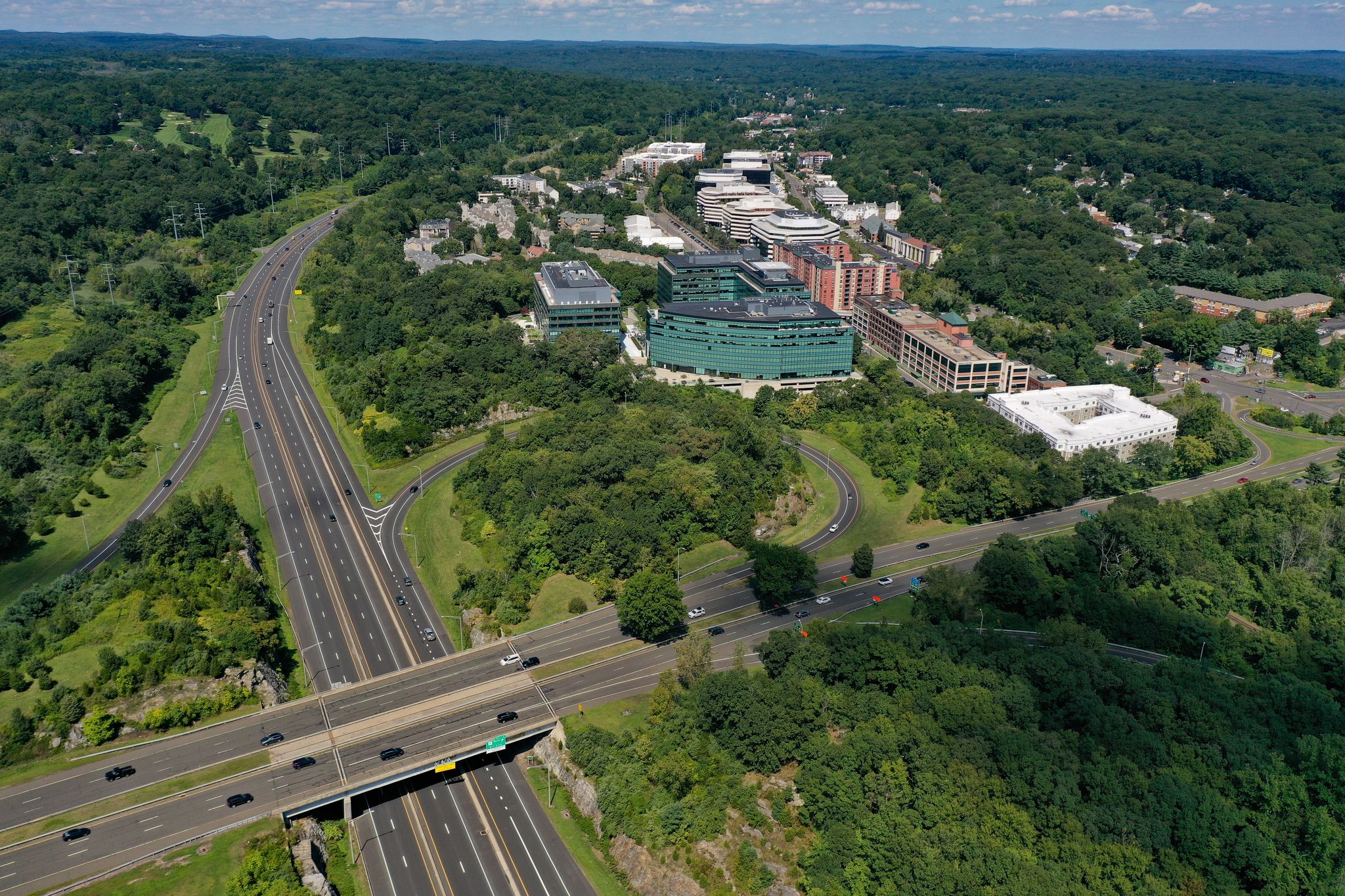 Despite the pause triggered by the coronavirus pandemic for congregate work and living, the firm that developed Stamford’s Harbor Point district is pushing ahead with what it envisions as Connecticut’s next largest residential development in the span of decades — at a site just north of the Merritt Parkway in Norwalk.

Building & Land Technology is planning to build seven residential apartment buildings on Glover Avenue, which when combined with the new Curb at North Seven apartments would add some 2,000 units to Norwalk if the developer wins approval from the city zoning and planning commissions. The expanded North Seven development would be sandwiched between the Danbury Line spur of Metro-North and the Route 7 highway extension, where a run of older industrial and flex buildings stand. BLT is looking at ways to connect a small residential area on a hillside just west of Glover Avenue to the overall project.

In addition to apartments, some of the buildings would include ground-level space for retail, cafes or services like fitness centers. “Because it is its own little island, it has very little impact on very many other people,” BLT general counsel David Waters said in an interview this week. “You have 2.5 million square feet of office space that is the economic engine for Norwalk — it’s the premier office space in Norwalk. What it needs is that supportive housing so that people can have a community where their employees live, work, play … so that it becomes a desirable location.”

South Norwalk has dominated the city’s development of late, with the new SoNo Collection mall in the process of being filled in by retail and restaurant tenants; the Harbourside SoNo apartments and Trinity Washington Village both under construction on the heels of the 19 Day apartments; and the Residence Inn Norwalk opening last summer. “I’ve seen the plan and it’s an interesting concept,” Mayor Harry Rilling said in an email response to a query forwarded by a spokesperson. “That area is really primed for development being so close to Merritt 7 and other businesses. I think the project is a good idea and will be good for Norwalk.”

BLT aims to break ground next year on an initial building across Glover Avenue from the site where the state plans to build a new commuter rail station. Construction work would proceed north from there over several years, eventually including a pair of buildings across from The Curb, where two buildings are complete and foundation work under way for a third in advance of final permits to build vertical. Last year, BLT acquired a swath of flex buildings along Glover Avenue, converting a warehouse into a summer beer garden and food gathering spot. BLT owns The Towers office complex and the One Glover apartments near the base of the avenue. “Our goal in all of this is to really create a community of the whole area, rather than just a development of our area,” Waters said. “Rarely do you get an opportunity to plan an entire community like we did at Harbor Point. … The idea here is to draw it into becoming public space — because that is how you create a desire for other people to actually come and be part of the area.”

BLT became lead developer of Harbor Point in 2008 and began construction the following year near the depths of the Great Recession, continuing to this day. Even as it added thousands of apartments, storefronts and offices, BLT balanced its Stamford holdings by acquiring office buildings like the former headquarters of Pitney Bowes near its apartment towers, or the former headquarters of General Reinsurance where it has attracted major tenants like Diageo, Henkel and Deloitte. Diageo’s arrival came at the expense of the liquor giant giving up its former North American headquarters at BLT’s Towers complex in Norwalk in favor of a Manhattan office with a remaining Connecticut toehold in Stamford. But with the coronavirus pandemic making some leery of life and work in the city, real estate agents and office brokers say the suburbs are getting a new lease on life.

BLT is betting big that elevator buildings will stay in favor, with North Seven to encompass apartments ranging from five to 15 floors including parking garages at the base of buildings. This week, the state began breaking out new coronavirus cases according to the living quarters of individuals afflicted, with 30 percent of cases occurring in congregate housing settings.

Waters is hopeful public hearings on the project can get underway in July, with construction possible for next year as the final Curb building is completed. If Harbor Point’s prime appeal was in its proximity to Stamford’s waterfront, North Seven offers easy access both to a swath of office buildings at The Towers and Merritt 7 Corporate Park, as well as the Merritt 7 commuter rail station. Waters said construction is anticipated to begin this summer on the new station, which will include a pedestrian bridge to the office park across the tracks which is home to Xerox, Frontier Communications and Datto, among other major companies.

BLT has promoted the concept of more-frequent shuttle service between South Norwalk and Wilton to expand the appeal of the stations at the southern end of the Danbury Line, with BLT offering parking in one of its new buildings to move vehicles off street-level parking running along the tracks and improve the visual appeal for that section of Glover Avenue. That could free up space as well for a farmer’s market, food trucks or other events.

Waters did not share BLT estimates for the total anticipated construction cost of North Seven. The project would require changes to the zoning allowances for some of the land where BLT would build, with Waters indicating BLT held off filing its plan until after the city of Norwalk completed its plan of conservation and development late last year. “We didn’t want our project to suddenly drive the discussion … but all the things we saw in the plan of conservation and development looked very positive in support of what we were proposing,” Waters said. “We wanted to wait and make sure we didn’t inject ourselves into the approval process, and we waited until they finished before we moved forward with our application.”

BLT would duplicate its development model for Harbor Point, nearing completion of a few buildings and public spaces before moving on to the next to space out work. “This is not a project you are going to complete in a year,” Waters said. “This is probably a 10-year project.” 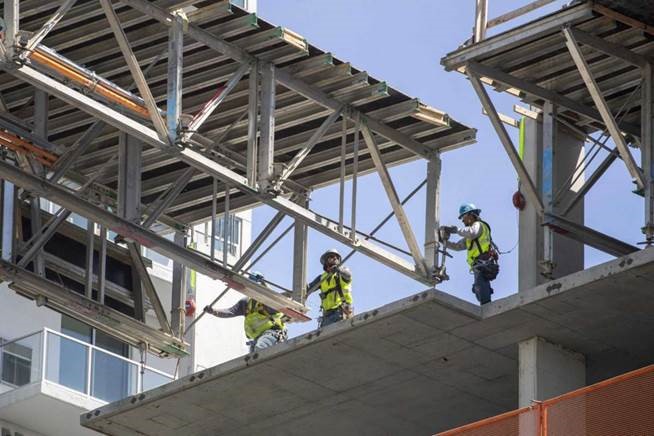 Construction workers help guide a structure being lifted by a crane onto a residential building construction site at the Harbor Point redevelopment site on the Stamford, Conn., waterfront, Wednesday, May 20, 2020. 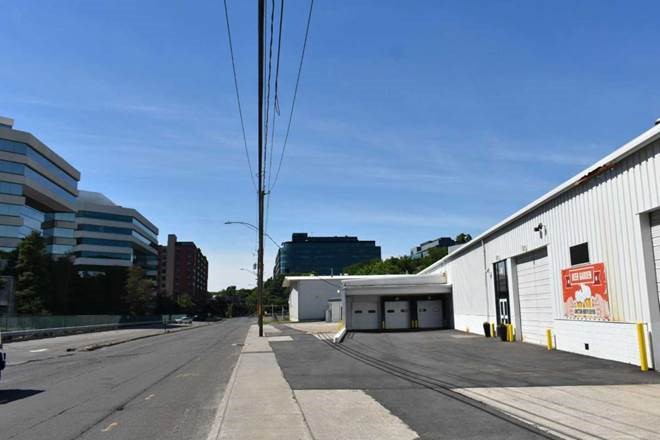 Glover Avenue in June 2020 in Norwalk, Conn., with the Merritt 7 Corporate Park (left), The Towers offices (center) and a beer garden operated in 2019 by Building & Land Technology (right). BLT plans to add several mid-rise apartment buildings fronting the tracks of Metro-North, its largest Connecticut development since its construction of … 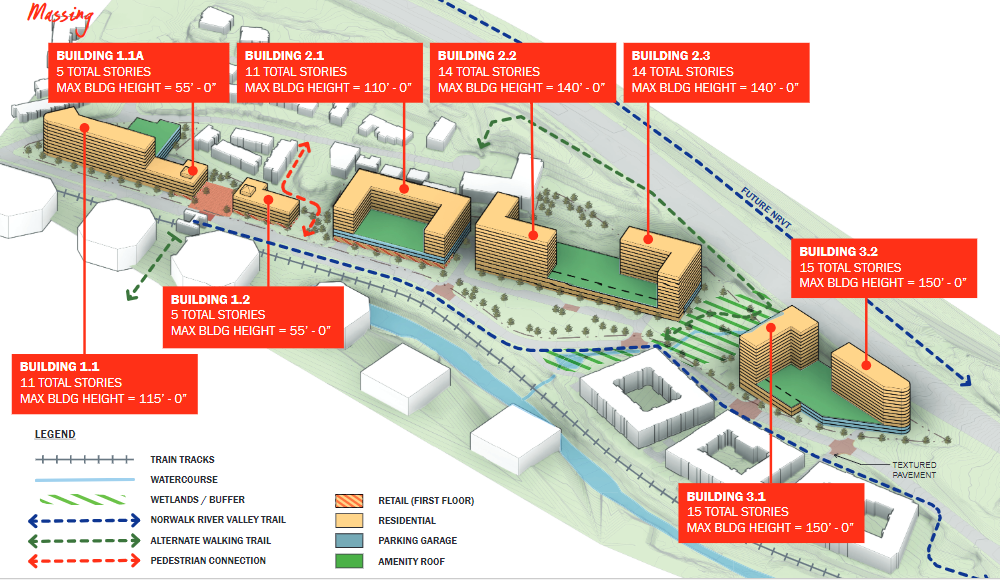 The North Seven development proposed by Building & Land Technology for land it owns along Glover Avenue in Norwalk, Conn.