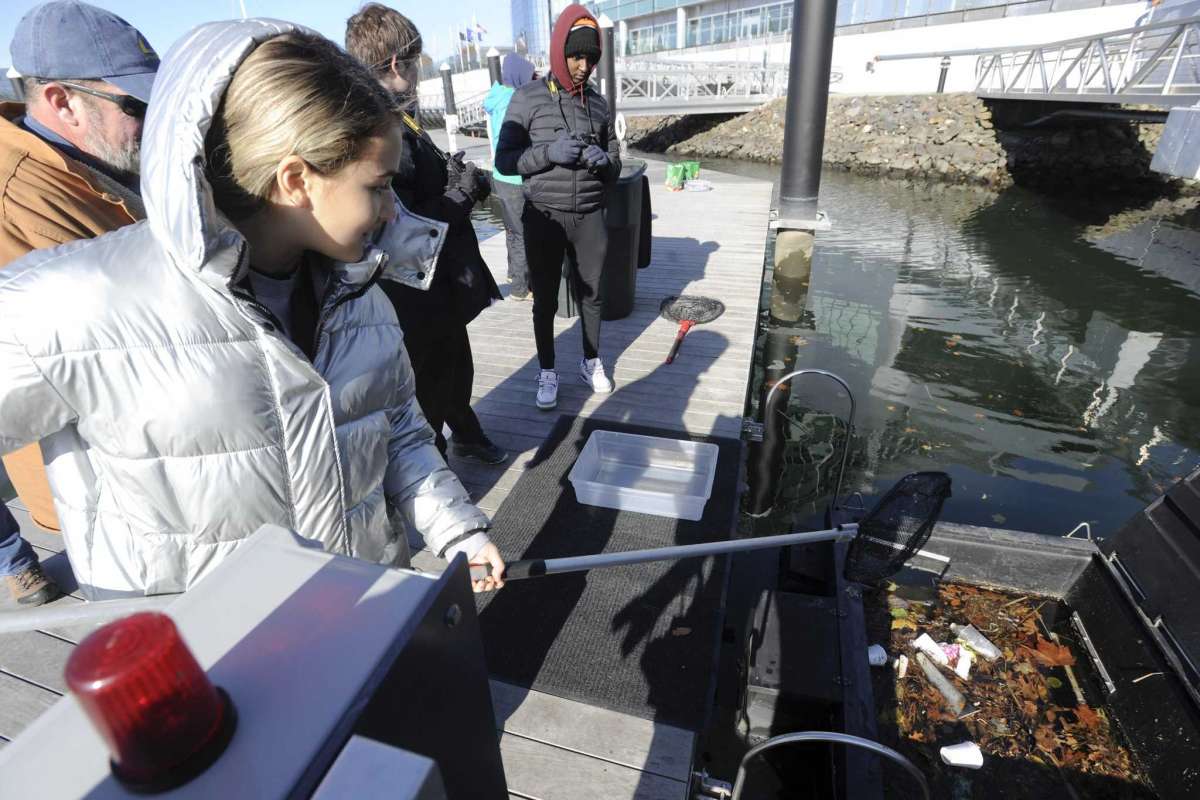 STAMFORD — Bottles, food wrappers, cigarette butts, and loads of leaves are just some of the items that have turned up in a new trash-collecting contraption installed in Stamford Harbor.  The receptacle, which essentially looks like a dumpster partially submerged in water, is called a skimmer, and was gifted through a grant to Stamford nonprofit SoundWaters to help clean the Long Island Sound.  While its purpose is collecting trash, one skimmer is unlikely to make much of a dent in eliminating debris from the water, according to SoundWaters staff. They see the skimmer as more of an educational tool that will help collect data on the types of trash that float into it.

The skimmer works by sucking in trash, oils and other debris, while pumping oxygen back into the Sound.  Leigh Shemitz, president of SoundWaters, said the skimmer helps people visualize the troubling level of debris that makes it into the water.  “It is mesmerizing,” she said. “Watching all these pieces of plastic makes you realize how big the problem is.”  Seeing how much trash floats into the structure isn’t as easy as walking up to it, as it is covered. However, SoundWaters hosts clean-up events in which visitors can scoop items out of the skimmer, sort the items and document the type of trash inside.

The skimmer was installed in early October and will be removed next month before the cold sets in. The plan is to return the trash-collecting receptacle to the water around April.  So far, there have been only been a handful of trips to the skimmer to collect trash, sort it, and document it. The most common items found inside were leaves, plastic bottles and caps, packaging, and cigarette butts.

For Shemitz, the message for Stamford residents is simple: “If it’s on the ground, it’s in the Sound.”  The fine for littering in Stamford is $90 for any material that is less than one cubic foot. Anything larger than that amount can result in a whooping fine of $1,000.  Some of the items that turn up on the city’s beaches and waters are seemingly direct results of local policies and bylaws.  For example, the number of plastic bags found in a recent beach cleanup was 85 percent less than the previous year, a possible indication of the effects of Stamford’s plastic bag ban that took effect in May. Additionally, the copious amount of leaves that make it to the Sound appears to be directly connected to how the city handles leaf pickup, by having residents push leaves to the curb, where they often end up in catch basins.  In an email, SoundWaters spokesperson Bob Mazzone said the skimmer would “open our eyes to the pervasiveness of the marine debris problem.”  “It will inform us about what detritus from our daily lives we are mismanaging so that it makes its way to the water,” he said.

The location for the skimmer was chosen by Harbor Point developer BLT, Shemitz said. The spot, which is just a few feet away from the back of restaurant Mexicue, tends to attract debris, she added.  Ted Ferrarone, chief operating officer for BLT, said the developer was happy to work with SoundWaters on the project.  “When they brought the opportunity to us, it seemed like an ideal way to educate people on how they can have a positive impact on the quality of the harbor,” he said.

The $12,000 skimmer is the first of its kind in the Sound, Shemitz said.  The grant to pay for the device came from Long Island Sound Futures Fund, which is a combination of funds from the Environmental Protection Agency, U.S. Fish and Wildlife Service and National Fish and Wildlife Foundation.  SoundWaters received roughly $21,500 from the grant, with a matching fund of about $19,400 from grantees such as Clean Ocean Access. The description of the grant states the skimmer will remove just over 3,000 pounds of debris from the Sound. Besides the purchase of the skimmer, the grant money will go toward maintenance and research.  Shemitz, who said SoundWaters is always looking for ways to improve the environment, said she wants to add more skimmers in Stamford waters.  She said anyone looking to access the skimmer and help with the trash research project can send a message to volunteer@soundwaters.org.  “It’s a great activity,” Shemitz said. “It’s a chance to see something powerful.”