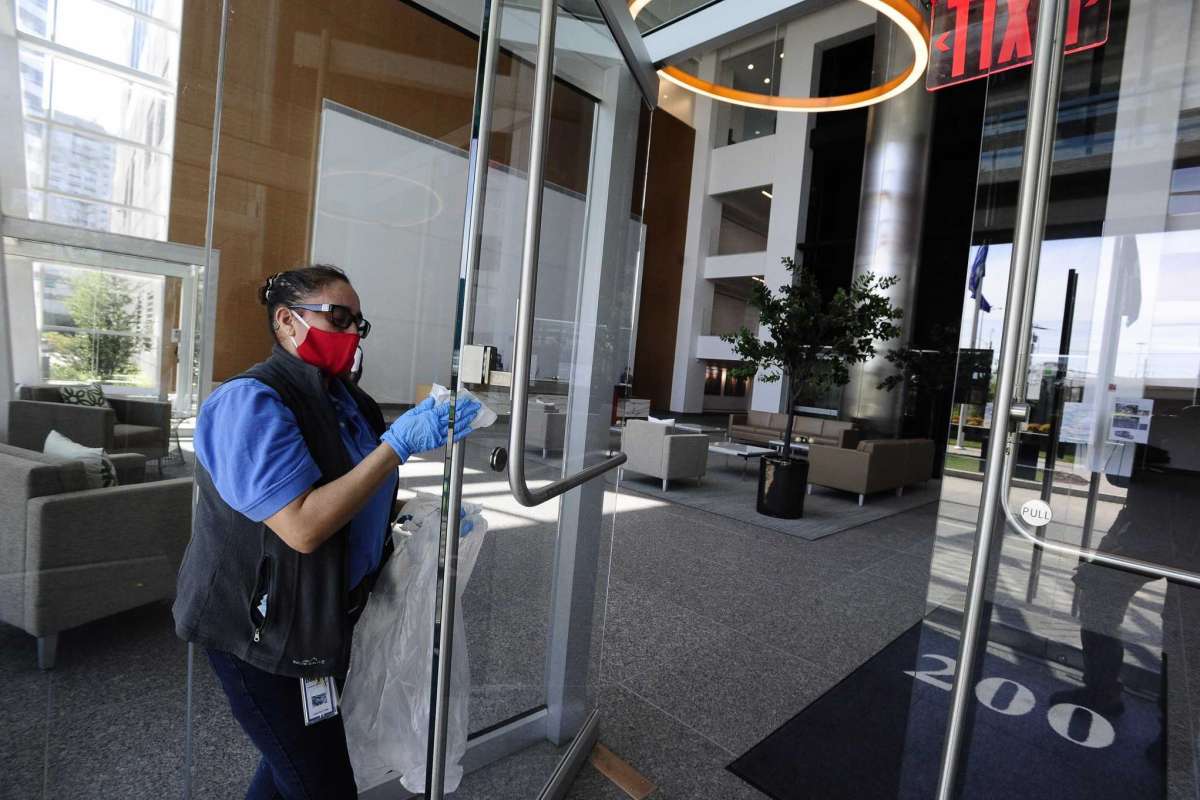 A front-door sign announces that anyone coming into the downtown office building has to wear a face mask, follow social-distancing directions and turn around if they are not feeling well.

Throughout the interior, floor and wall signs direct workers and visitors to stay masked, remind them to keep six feet apart and tell them to wash their hands. Hand sanitizer and tissue dispensers reinforce the message.

Those new features at the Building and Land Technology-owned property encapsulate the changes that professionals across Connecticut will encounter when they return to their workspaces following the launch Wednesday of the first stage of the state’s economic re-opening.

But, by design, the green light for office operations is not likely to spark a rush of returning workers — and many companies intend to take much longer to revert from their remote accommodations of the past two months.

“Companies are really thinking about the workplace and trying to create a safe workplace,” said Brian Kropp, chief of research in consulting firm Gartner’s human resources practice. “If you’re opening up your workplace, just as much as you’re managing the actual safety, you have to manage the perception of safety.”

New Rules
Building owners like BLT have updated their properties to comply with a panoply of new state and federal regulations.

Among the most visible differences, offices can only operate at 50 percent of their capacity during the first phase of the state’s re-opening. To help limit occupancy, Gov. Ned Lamont’s administration is directing employees to continue working from home if they can.

Within the offices, workers will have to keep their face coverings on and sit at desks spaced at least six feet apart. Workspaces must also be separated into “discrete” zones, with movement limited between them when possible.

But many decisions will still be in employers’ hands.

While tenants are in charge of their respective workplaces, landlords are responsible for maintaining common areas in office buildings, including lobbies and elevators.

At 200 Elm, the fitness center and cafeteria will stay closed for the time being. Occupants can order from the dining hall’s menu and have food delivered to their offices.

BLT officials said that tenant input was crucial to their preparations for the re-opening. Feedback came through several channels including a survey and Zoom meetings.

“Probably in the first week of March, we started to anticipate what it would look like when we got this to this point,” said Mike Handler, a member of BLT’s management committee. “Each step of the way, we’ve developed internal policies and procedures that we are implementing for our employees. … And we have shared and will continue to share our best thinking on what we’re doing for ourselves, with our partners.”

Cautious Approach
BLT expects to re-open with office occupancy levels of about 10 percent to 20 percent across its portfolio. The outlook reflects the state-set limits and many companies’ preference to ease back into office routines from remote-work arrangements.

Consumer-goods multinational Henkel, the largest tenant at 200 Elm, has had a limited number of employees continue to work there to keep developing products such as soap and hand sanitizer. But most of its approximately 450-person Stamford contingent has worked from home since mid-March.

The company does not plan to re-open those offices or its sites in Darien, Trumbull and Rocky Hill before the end of this month. When its office operations do ramp up, attendance will initially be limited to 30 percent of the teams based in those locations.

Job-search giant Indeed, whose co-headquarters are based in two neighboring downtown Stamford buildings, said this week that it did not plan to re-open any offices until September at the earliest. It was one of the first companies to close its offices in response to the pandemic’s spread to the U.S.

Stamford-based consumer financial-services firm Synchrony, the No. 173 company on last year’s Fortune 500 list, is planning to have all its employees work from home through the summer.

Among other financial-services powerhouses headquartered in the state, neither Stamford-based Point72 Asset Management nor Greenwich-based AQR Capital Management have immediate plans to re-open their offices.

While most of southwestern Connecticut’s corporate mainstays quickly closed their offices after the state’s first confirmed COVID-19 cases in early March, some were initially reluctant to pursue that strategy.

To the consternation of many of its employees, Stamford-based Charter Communications had asked its employees in mid-March to keep reporting to work unless they were sick or caring for someone who was ill.

The company eventually amended that policy and said employees could work remotely if they could demonstrate that they would be as effective as they were in the office.

Charter said this week that “a significant majority” of its more than 1,300 Stamford-based employees are working remotely, although it declined to specify the number.

“As an essential business, we have never stopped working,” the company said in a statement. “When we do begin to phase our remote Stamford workers back to the office, it will be consistent with our business priorities to insure an orderly process and in accordance with the local and state health and safety guidelines.”

About 30 of electronic-trading provider Interactive Brokers Group’s approximately 600 Greenwich-based employees have kept reporting to its main offices. Those still coming in mainly specialize in areas such as IT and facilities and cannot work remotely, according to the company.

Interactive does not plan to officially re-open its offices next week. A return in June is more likely, although not finalized.

Workplace Evolution
In the long term, 48 percent of employees at firms surveyed by Gartner are likely to work remotely at least some of the time, according to Gartner estimates. About 30 percent worked remotely part of the time before the pandemic.

Alongside physical distancing of employees within workspaces, businesses are likely to institute other measures that would limit occupancy.

Having all workers in an office work 9 a.m. to 5 p.m., Monday through Friday, is likely to become less common. Some businesses might decide to split up their personnel into teams that come in on different days or divide them into shifts that might start earlier in the morning or end later in the evening.

All the while, the threat of the virus will still linger. Only about 30 percent of companies have a plan to vacate their offices again in the event of another outbreak, according to Gartner.

“It’s not just that you want to have safety protocols in place,” Kropp said. “You want to communicate that to employees because if your employees know you have a plan to exit, that’s going further improve their perception of safety.”